The fourth day of our adventure was a hike around the Ouray Perimeter which turned out bittersweet for me. The hike was awesome, but I screwed up and didn’t pay attention to my camera settings before we set out. Every shot I had was completely underexposed to the point that everything was unusable. Luckily, I got a couple shots the day before when we arrived in town, I did take some pictures with my phone for Instagram, and my wife was my second shooter to help enhance the story and her shots turned out. So there are pictures! Let’s start at the beginning as we will continue to do for the 2017 Family Vacation.

If you’re new to this string, keep reading. If you’ve read about our adventure before, skip to the next picture.

I must give credit where it is due. While the majority of the trip were places we knew about, the specific itinerary ideas were thanks to a YouTube channel called Less Junk, More Journey. The channel is a regular vlog about a family traveling around the country full-time in their RV. I used locations from their videos that really interested Cheryl and I, and formed a route that covered most of the state of Colorado. The route’s intention was to give us a taste of what every area had to offer so that we would know what we wanted more of. We consulted the kids to get their input and set our plans in motion. 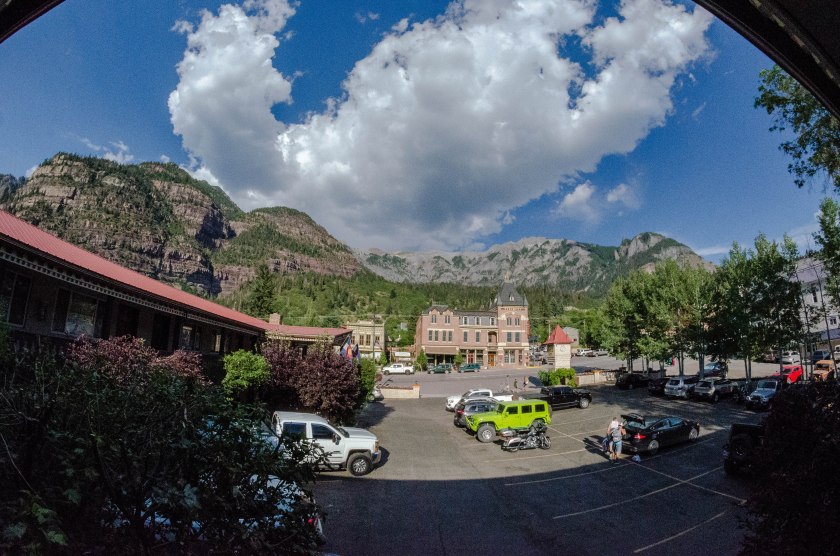 Our third stop on our adventure was to the tiny town of Ouray in the southwestern corner of the state. I had heard of the town before, but vaguely knew anything about it. When the Less Junk, More Journey channel featured a hike there, I knew it had to go on the list. The town is nestled in the mountains at around 8,000 feet of elevation, which allows you to look in any direction and be rewarded with an amazing view. The above shot was from the front door of our hotel room, the shots below were from the back balcony (the bridge is part of the trail). 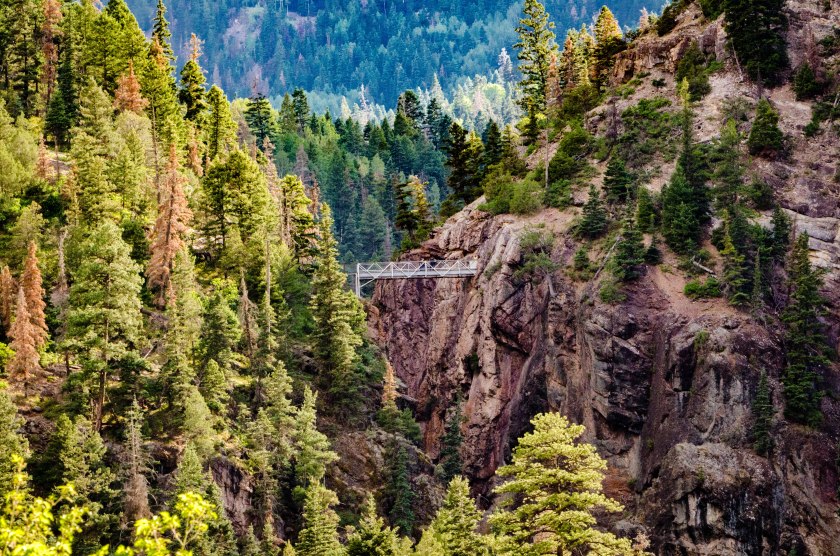 For its size, the town was intensely busy. The main street was packed with people checking out the shops, mostly tourist trap souvenir stores and a couple candy shops. There were a few places to eat, although I’ll add that they know what they are, where they are, and charge accordingly… There was one grocery store in town that was more of your traditional country store with a limited inventory. It was quite warm the day we got there and I went to get some water for us only to find that they were sold out of pretty much everything liquid and they had no ice. So we rationed what water we had in our Camelbaks as we were intending on refilling in town and the hotel water… didn’t feel right. However, the humming birds thought the water was pretty sweet… 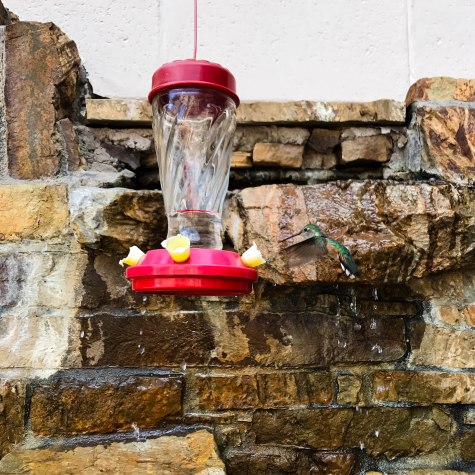 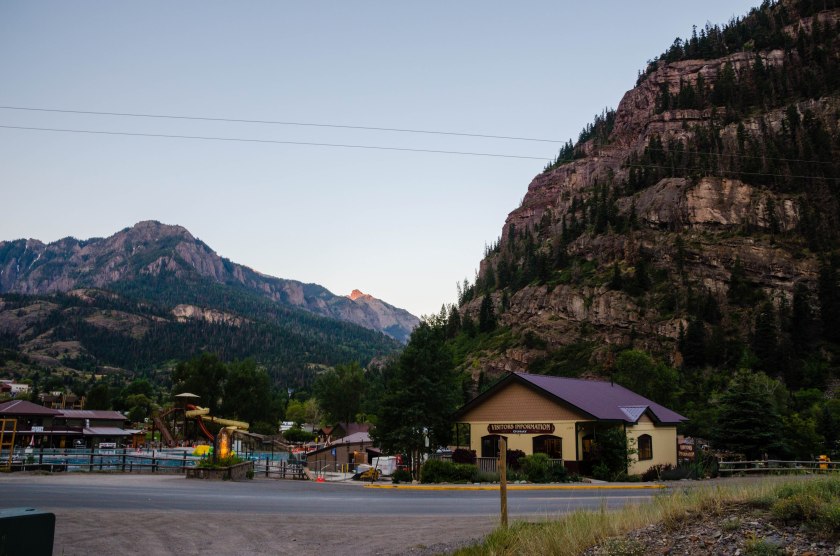 The perimeter hike was harder to research than I anticipated. There were tons of sources quoting that it was a 5 mile loop. However, no one had any maps to back that up. There was a lot of that, 5 miles, no proof. Even once we got to town and looked around all I found was a map on a pamphlet from the visitor center that revealed the trail wasn’t completely finished, but there were plans. What we found was a trail that was 75% complete, but still worth every ounce of sweat to experience it. 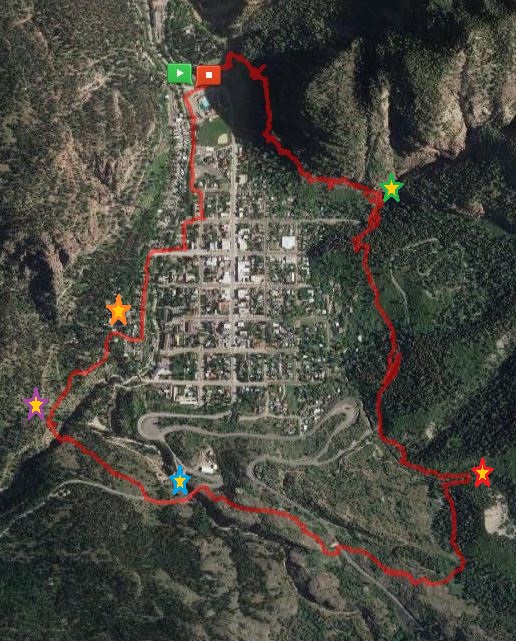 One thing I like about the trail is that you can start it at pretty much any point you want. There are access points all around the circumference of the town. We decided to start our hike from the visitor center at the northern edge of town. We parked the Jeep in the parking lot for the hot spring fed pool, strapped on our packs and headed across the street to the trailhead where we were greeted with an immediate steep switchback climb to the trail overlooking the town.

I think the reason you jump straight into a climb is so that when you take a moment to catch your breath… you get to soak in the view of the sleeping town below. The trail itself is what I envisioned a trail would be like in the Colorado mountains, worn and rough and potentially dangerous. At certain points the trail is only a couple feet wide and the edge of it is a sheer drop-off into a scree field that would tear you up.

The northeast portion of the trail is the most attractive and pleasing in my opinion. On one side you have the view overlooking the town, with a gray rock of the mountain climbing above you on the other. All smiles the whole way. Then at the northeastern “corner” you come across a waterfall (green star) that we noticed from town. This was a bit sketchy as finding the route to base in order to pick up the next section of trail took a few minutes. We eventually got to the bottom and found the older kids who had disappeared down the trail on their own. 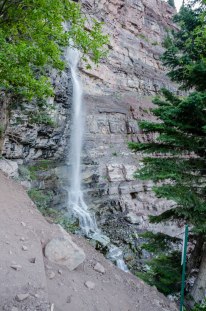 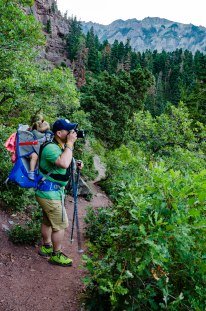 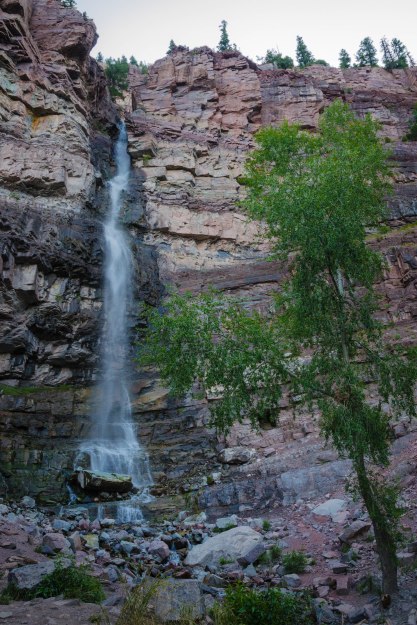 What we thought was Titan and Odessa waiting for us to catch up, turned out to be them just not knowing where to go from there. At the base of the waterfall is an access point to the trail. I went over the route with everyone the night before and they remembered there was a road walk near the fall. So using their smart goat-thinkers, they waited to verify if that was the road walk or not, it was not.

The next section from the falls to the southeast “corner” was a nice wooded section through pines. This is one of the sections that has a road walk. It once again starts out with a switchback climb to get back up to the trail level. After a little bit it comes to a road and the sign is kind of confusing. It appears to point northeast, so we started to walk the road uphill, but it didn’t feel right. So I broke out the pamphlet and compass and turned us around. We should have been heading the other way downhill. Luckily I didn’t let us get too far and we got back on track.

The temps started to feel a bit chilly and CJ was getting a little crabby. So Momma came up with the idea to put her jacket on and then take my rain jacket to wrap her legs up with it. It was just enough to get the wind off of her and let her body heat increase enough to bring out the gabby baby-girl I know and love. It was some good Momma goat-thinkin’. Once again the older kids pushed on ahead further, at least this time we got to catch glances of them now and then.

This section wound through a couple campsites and ultimately came to a conclusion with a steep uphill hike on a service road (red star). Momma and I had to take a break after that climb, so glad for the trekking poles. 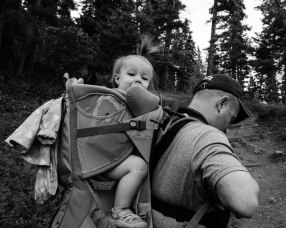 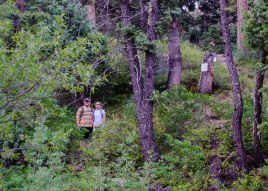 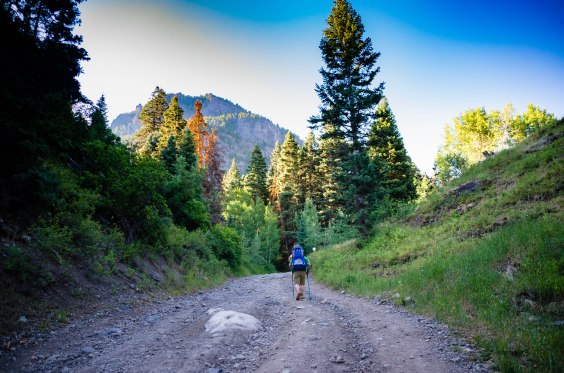 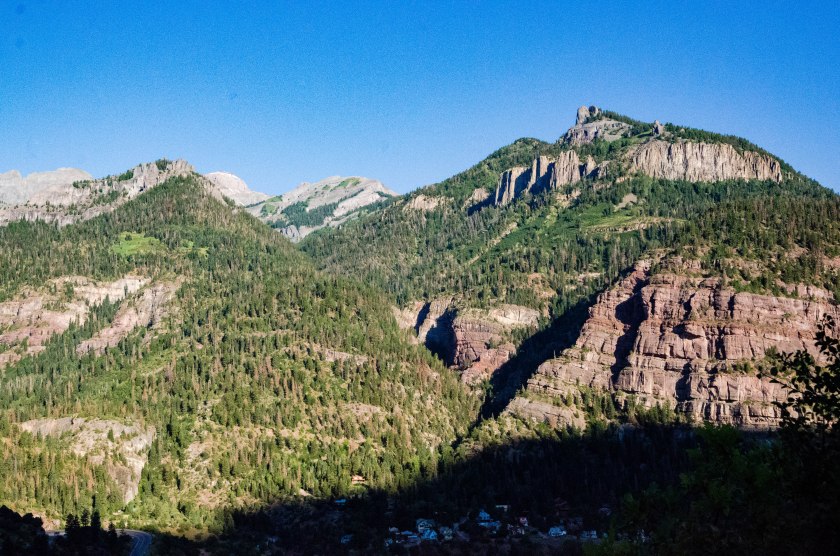 After we recovered from the climb and snacked on Clif Bars, we continued on our way. The next portion brought back those views we were first presented with. It was pretty open, rocky, and full of scrub brush. Here is where the trail gives you an option to take the shortcut straight toward the bridge from earlier, or you can wind a little further south. We chose to take the shortcut route, which was a rugged, rocky decent that taxed the knees a bit. It eventually terminated at a road (blue star) that headed back up towards the trail to the bridge and tunnel. 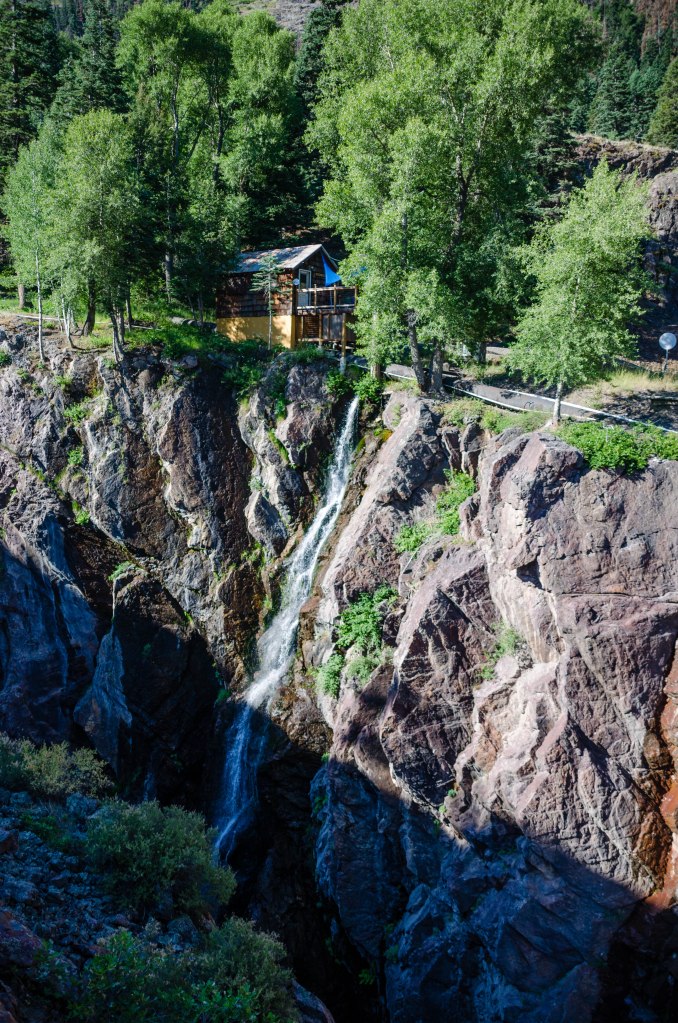 There was a short road walk that crossed a bridge and gave us a view of another waterfall that fed into a small river. Unfortunately the pictures of the actual river didn’t turn out. It had some pretty violent rapids in it though. It wasn’t long before we reached the bridge crossing the gap over that fast flowing river.

The neat part about the bridge (purple star) is that you cross over into a tunnel through the mountain. The ceiling is pretty low, so we put the sunshade up that comes with the Osprey Poco Plus child carrier to help inform me when the ceiling was getting too low and could bonk CJ in the melon. Definitely, wanted to protect her from that.

We passed through the tunnel without incident and emerged into the daylight on the other side. It was only a hundred yards or so until the trail met up with a dirt road (orange star) and our off road journey was done. From that point on the dirt turned into pavement and it was a road walk back to the car. This is one of the areas they said they had plans to expand in the future, funds just weren’t there yet.

In the end the hike came out to 6 miles after taking the shortcut. We all super enjoyed the experience, and after looking through the brochure we discovered there is a pretty good sized network of trails surrounding the town. So we may have to return for an extended period of time to do some more exploring!

From there we drove straight to Mesa Verde National Park. So until next time, get out there and go for a walk!

Please click the link and head on over to YouTube and watch the video of the Ouray Perimeter Trail!