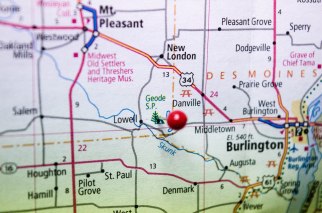 Geode State Park is located in the southeast corner of Iowa near Danville between Mt. Pleasant and Burlington.

There is a single 8 mile trail that circles the lake. Trail maps for Iowa state parks can be found on the Iowa Department of Natural Resources website.

Although, be suspicious of their recorded mileage. This park is a perfect example as the map tells us it is 6.56 miles, when in reality it is 8.05 miles. Now most are actually accurate, but that’s also why I am creating a database of confirmed numbers. /wink. The trail is well worn with a couple short sections of road-walking. It is quite an enjoyable hike as you meander through the rolling hills of the forested trail. The first time I hiked the park was in April of 2014. At the time the park was still coming out of winter and hadn’t shed its brown layer yet.

Even so, it was still a very pleasant stroll with my wife. I returned this fall with a friend and the colors were excellent! It was a murky day that threatened rain, so I elected to leave the cameras in the car. I regretted that choice almost immediately. We both commented often at how nice the forest around us looked.

As far as difficulty, I would say Geode should be accessible to anyone who has enough fitness to travel 8 miles on their feet. For those who are not there yet, there is nothing wrong with finding a parking spot and just doing a down-and-back for a few miles on one of the sections of the trail. There was only one stream that could possibly cause an issue in late spring when the melt is flowing for those that don’t want to get their feet wet (in chilly post-thaw water). While a full daypack isn’t needed, I would suggest a good quantity of water and possibly a snack. If you don’t know your average pace, I would suggest planning a minimum of 3 hours to make it all the way around. The first time I hiked it, it took 3.5 hours. However, my return trip only took 2 hours and 45 minutes.

Another note is that this park is approved for mountain bikers. It would be more of a cross country style ride without obstacles. It appears to be pretty popular as both times I hiked it there were riders on the trails. Thanks for reading and don’t forget to check out the video over on YouTube.

With the layoff happening soon, and taking the leap of faith to go full-time photog, I was looking for a weekend to decompress with the girls.…
Doing some midnight grillin’. A little steak, salmon, and shrimp needed some cooking. Been in the freezer for a while. The grill is on her last legs, but she doing her job tonight. These night shift sleep schedule evenings are going to be coming to a close soon. Full time photog here we come!
Things are heating up! Trolls! Quidditch!
Mommy introducing the Boogs to Harry Potter. (It is kinda late for both of them…). We’ll see if either finishes. Hehe.
The #lego #wintervillage is complete finally. (Except for this year’s house, it’s still sold out.) I told Cheryl we’re gonna have to start in October next year…
To the past, present, and future of our beloved Corps. To those with their loved ones, to the ones never to return, and to those who may have recently lost their internal wars. Happy Birthday Marines! May all find fair winds, calm seas, and be at peace.
Follow The Iowa Hiker on WordPress.com
Loading Comments...
%d bloggers like this: