Well I guess it is that time of year where I do a write up on the past year of getting my shoes dirty. I have to say 2017 was a pretty good year. Even though there were a good number of miles that my feet didn’t get to walk, I achieved a lot of the goals I set for myself. 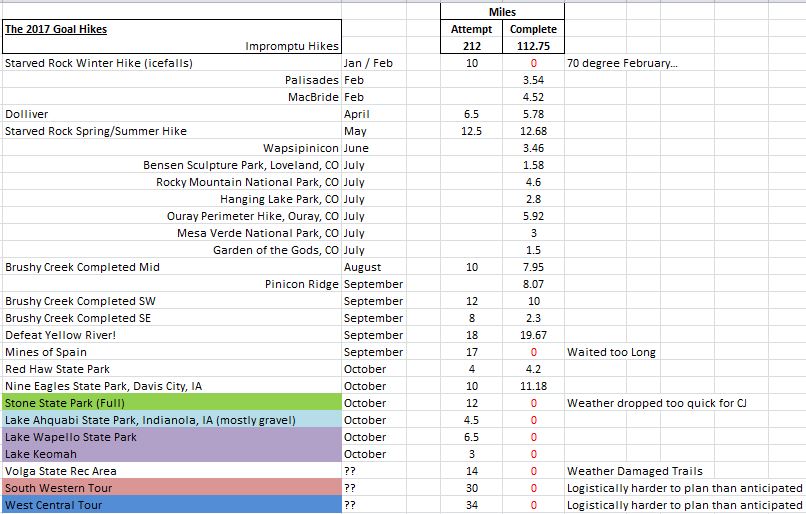 Every year I set the goal to cover at least 100 miles of trails. For 2017 I went super ambitious and tried to include the remainder of the state parks I’ve researched, the hikes my wife and I like to do each year, and my return to Yellow River for redemption. In total I set myself on a collision course with 212 miles of ground pounding (2016’s 140 miles is the most I’ve ever done). As you can see from the screen shot of my spreadsheet… I didn’t make it. I did make my annual goal of 100 miles by 12.75 miles, so it’s still a win.

If there was a negative to be found with this year’s hiking; it would have to have been not getting to do the winter icefall hike at Starved Rock, and the Halloween hike that my wife and I enjoy doing every year. This year looks to correct the icefalls at least… -46 with windchill last week.

Two of the best hiking achievements of the year were beating Yellow River, and finally experiencing the outdoorsman mecca of Colorado! It’s been six months since our family adventure and we still can’t stop thinking about it. Of course I did just finish posting about it a couple weeks ago, so there’s been a constant reminder. 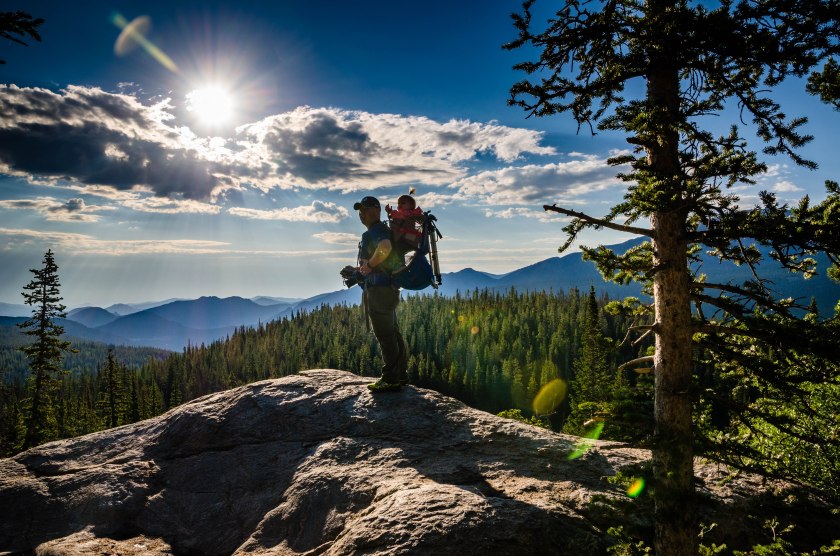 Looking over the website, I think I have been improving on my ability to produce better trail reports and blog posts. I love the map addition! Some of my early posts were quite short with limited information. My more recent ones I feel give you, the readers, a better picture of what to expect. To everyone who has messaged me, I do appreciate all of the compliments you have given, I sincerely thank you. I hope to continue improving upon the resource I’m building here.

One way I have been improving the posts has been through my photography. I have been upgrading my gear to better capture what my eyes see in order to share it with you. I have several more upgrades I still want to get in order to make them even better, but for now I will continue to capture the best images I can. (In other words, they ain’t cheap!)

What started out as something to record my hiking journeys for memory’s sake, has turned into a real passion. I started with nothing more than a mid-level Sony Cyber-shot point-n-shoot camera. It got the job done, but the more I started to enjoy the craft of photo and video, the more I desired to upgrade.

Then one night Cheryl and I were lying in bed in a hotel room outside Starved Rock… waiting for Titan and Odessa to finish getting ready for bed so we could icefall hike the next day (dirty minds…). We had been married for just under a year, and we had recently just decided to try for my first child. We hadn’t told anyone, so our conversations were in hushed tones and secret code around the kids. However, that was the night that we made the choice to invest in a nice mid-level DSLR camera to capture the future life of our little CJ. I have since increased my inventory from the simple Sony point-n-shoot, to a Nikon with 2 lens, to uh.. a lot more…

On the topic of upgrades, see the PC on the left with the glowing colors and 3 monitors? Yep, that is the Edi’nator! The one on the right is the 9 year old darling that is still a strong PC when it comes to most functions. However, it finally hit a point where it was starting to lag on photo edits, and video was just too frustrating. So Edi’nator was built to edit the heck out of some Iowa Hiker media. Which means I can finally get back to making videos. The first video it edited was CJ’s second birthday video. Not even a slight hiccup.

I’ve loved every minute I’ve spent developing better and better content (literally everything in those pictures is to deliver better photos and videos to you). So much so that I’ve decided to put a concentrated effort into building a landscape photography presence. One reason for the decrease in my online presence over the past several months has been because I have been putting most of my focus on setting myself up to move into a professional photography capacity in 2018! dun dun dunnnnn!

Now I’m not quitting my job and risking it all, I like my job, and it affords me plenty of opportunity to get outdoors as it is. This is more of a long term, slow developing… (pun intended), retirement plan. I haven’t launched an official photography website yet, I’m waiting until I feel it looks right. So far I’m just not satisfied. I acknowledge it’s the perfectionist in me that I regularly attempt to suppress because he holds me back. Although he did reward me with a Summa Cum Laude on a BS in Psych thanks to a 4.0. (Slavedriver ID…) Regardless, I’m excited. As far as honing my skill, besides shooting everything I can when I hike for repetition’s sake; when you have such an adorable subject that knows when the camera is on her such as I have, it makes practicing easy!

I’m not sure I would have noticed if it could have been better. I hope your 2018 is going to be filled with happiness and dirt. So far my rough itinerary is up to 204 miles… 😉

The next upgrade; this logo my best man made for me. I really like the idea behind the design, but I feel it needs more umph… and Notre Dame… lol not really, but it’d be cool for a game day t-shirt. My wife actually had one made for me before we were married where the t-shirt is navy and Iowa is gold. She’s the best.

The #lego #wintervillage is complete finally. (Except for this year’s house, it’s still sold out.) I told Cheryl we’re gonna have to start in October next year…
To the past, present, and future of our beloved Corps. To those with their loved ones, to the ones never to return, and to those who may have recently lost their internal wars. Happy Birthday Marines! May all find fair winds, calm seas, and be at peace.
Game one was a little chilly for momma. Worth the cold as CJ finally got her first goal! She was so excited!
Shark ducked!
@cheryl_pettit and I finally got go to our first #notredamefootball game! Thank you Gary for the tickets for our birthdays! It was super fun and an awesome atmosphere! It helped beating an old school rival, the Purdue Boilermakers, to make it even better. The season ticket holders around us joked that we’re hooked now, and Iowa isn’t that far away. Lol
Badlands National Park was a beautiful place to end our South Dakota trip! The skies were mostly heavy clouds to overcast, so I took liberty of a few sky replacements. Got a pretty good banger for the “CJ the Adventurer” series though!
Follow The Iowa Hiker on WordPress.com
Loading Comments...
%d bloggers like this: